Home » Speedway » Qualifying Is A Crucial Part Of A Karting Race

Qualifying Is A Crucial Part Of A Karting Race

As qualifying won’t usually be a one lap shoot-out, you have the opportunity to spend most of the session familiarising yourself with the track before you set off on your ‘hot’ lap to try to claim the pole position. Unless you already know the track well, it’s unlikely that you’ll be able to set your best lap on one of your first laps. 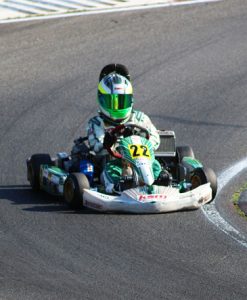 Don’t leave it too late though or you may not get chance to actually put in your ‘hot’ lap, especially if your lap is compromised by other competitors who are out on track at the same time. If you do encounter ‘traffic’, it’s best to step off the pace to put some added distance between you and kart in front as flat out racing against each other is likely to compromise both of your ‘hot’ laps.

Contrary to popular opinion, an aggressive karting style isn’t always the best tactic for improving your qualifying times. The ‘right’ driving style will vary depending on the layout of the track, but you can often achieve the optimum lap times if you vary aggression with smooth handling of the kart to strike the perfect balance. This can be extremely difficult to do, and it’s a skill that will probably require a considerable amount of trial and error to get it right.

Karting experts suggest that if you make a point of paying close attention to the various elements that contribute to making a go kart travel fast (for example, the load that you’re putting through the kart), you will become a ‘smoother’ driver as a direct result. An aggressive karting style will often involve literally throwing the kart into and around corners but this can easily lose you valuable time and affect your overall grid position. Because of this, a ‘smooth’ karting style is more preferable but this also has its disadvantages as time can be lost by concentrating too much on this, especially when taking corners. Instead, try combining a predominantly ‘smooth’ karting style with an aggressive braking style to avoid losing time when cornering.

A ‘smooth’ karting style won’t necessarily be the same for everyone. Some karters may achieve it by steering predominantly with their shoulders instead of their arms, while others may get the same effect by braking more aggressively but backing off more quickly. In many cases, finding your ‘smooth’ driving style will take some practice to see what works best for you. Contrary to popular opinion, while your karting style may appear smooth to other people, it doesn’t automatically mean being very gentle on the steering wheel. Indeed, many ‘smooth’ karters are actually quite aggressive when steering.

We are an ALL indoor, high speed karting facility. No matter what its like outside, its always race time at Rush Hour Karting! And, this is indoor racing like you've never seen before.This indoor karting track is not like those family fun park & karting tracks.